Ricochet River
In 2009, the Oregon State Library chose Ricochet River as one of the “100 Oregon Books for the Oregon Sesquicentennial,” a list that begins with the Journals of Lewis and Clark.
A gifted stranger comes to town. Jesse Howl is the wild one, an American Indian who dances unannounced into the lives of a pair of high schoolers who are busy exploring who they are. Lorna, the girl, is bright and brassy and skeptical of this Oregon mill town she’s trapped inside. Wade, her boyfriend, is the quarterback and top student with an inflated sense of his importance. Wade is cautiously comfortable in this modern American frontier of a place. He could use some shaking up.

When Jesse arrives in Calamus he brings with him the Native American creation myths and incaution and irresponsibility of a “bad boy” you can’t help but love. A three-way friendship develops. And here we go on a rollicking, warm-hearted, much-acclaimed coming-of-age story. The woods, the Calamus [Clackamas] River and Pacific Salmon come prominently into play. Call it a novel of place, the setting is so central to the action. 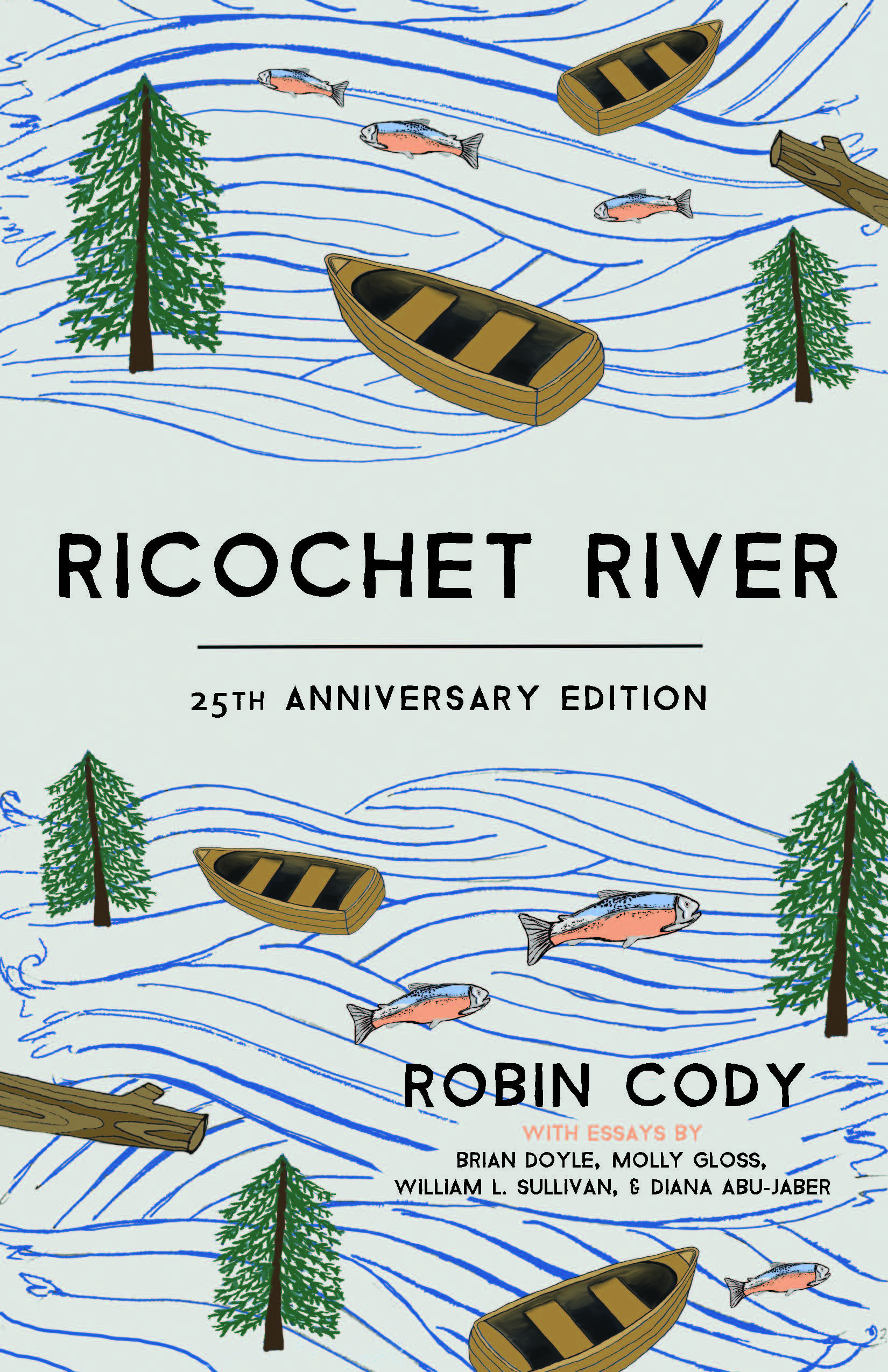 Wade and Lorna and Jesse are alive in these pages. You can smell the woods and the rivers and the mills, and there are blessedly no lectures and sermons, and there are hard and gentle and awful and hilarious things going on, and the author has such a great ear for the way people actually talk that you forget very quickly that a writer actually wrote it. To Ricochet River, I apply the word classic with pleasure and with gratitude that such a book will jazz readers’ heads and hearts and souls for many years to come.

Brian Doyle is the author Mink River and Martin Marten.

Brian Doyle
Mr. Cody sets the crucial scenes out of doors, and much of the book’s rich imagery spring from this very particular terrain.  In captivating prose, Mr. Cody tells a story of unusual wisdom and grace.
The New York Times

A teenage classic of growing up in the tradition of The Catcher in the Rye and A Separate Peace, but better for the inclusion of a wonderful young woman and an American Indian.

Peter Sears
A touching exploration of friendship . . .  The author has a naturalist’s feel for the Pacific Northwest, evident in his majestic descriptions
Publisher’s Weekly

The world of Ricochet River is the world I grew up in. It’s a world of fir forests and rain, big rivers, whitewater streams coming off the shoulders of mountains, a world of mill towns and log trucks and spawning salmon. Jesse and Wade and Lorna live here, and I know all three of them. “Calamus is a factory,” she tells Wade. “They box you up in tight little packages. Your cheerleaders, your farmers, your greasers. Your jocks.”  And although she’s fearless, she knows what there is to fear: “I’m scared I will never get out of Calamus.”  I haven’t met many girls like her in fiction—whip smart, bored with school, savvy about life, skeptical, funny, sarcastic, determined.  If only I had met Lorna when I was growing up, she might have helped me figure it all out.

Molly Gloss
Jesse Howell, the spiritual center of Robin Cody’s first novel, is sweetly naïve and generally full of beans, much like the trickster Coyote of Indian mythology.
Los Angeles Times
Cody is an extraordinarily gifted storyteller.  Ricochet River offers images of the Oregon landscape, salmon runs, logging and millworks, and very real characters.
The News-Review, Roseburg, Oregon
If we go to novels for a sense of vision, we will find in Ricochet River the topography of injustice, a map soberly true and vitally relevant, telling us where we stand.
Oregon Historical Quarterly
Ricochet River
How the Story Evolved
Forty-some years ago, in the mid-1970s, I was teaching sophomores and up at the American School of Paris.  We read literary classics that had young narrators:  Huck, of Huckleberry Finn, Holden, of Catcher in the Rye, and Scout, of To Kill a Mockingbird.  Then came a movie that knocked me out.  Larry McMurtry’s “The Last Picture Show” featured three young people – two guys and a girl – figuring out what to do with themselves in a dying Texas town.  The film was so life-loving and funny and true it made me teary.  I admit this.  I got lightning-struck to try writing a book.

My story would be set in a fading Oregon mill town like Estacada, where I grew up.  I imagined three high school seniors.  One would be an exaggerated version of a smart messed-up Indian friend I’d had in school.  There would be woods and rivers, loggers and townsfolk, wildlife and innocents, laughing and crying on the American frontier.

Untroubled by knowing nothing about the craft of writing, I wrote like mad.  Up late into the night, I downed brandy and thick French coffee at the corner café.  I was Earnest Hemingway, punishing myself in the service of literature.  The following summer I went at it again, head down and jazzed.  By August that year – on a clunky manual typewriter at home – I’d pounded out a manuscript and airmailed four copies (350 pages each) in cardboard boxes to four New York City publishers.

Long story short . . .  It took me fifteen years and three complete re-writings to land a publisher for Ricochet River.  After each round of rejection, I lost courage and put the manuscript aside.  Yet the same story came bubbling back up in my head, demanding attention.  Over and over again I had to muster the confidence – no, the arrogance – to keep at it.  And with time and revision, the story improved.  Lorna grew brassier and stronger.  Jesse took on the Native American creation myths of Coyote.  Link became wilder and more contrary.  The life of Pacific salmon came majorly into play.

And then, finally . . . In the fall of 1991, the New York publishing house of Alfred A. Knopf bought the manuscript.  Knopf assigned an editor who offered two good big fixes.  The final one-third of your manuscript, he said, is not as strong as the rest of it.  And your secondary characters are less vivid than your main three.  Over another spring break and summer I revised yet again the manuscript.  Among the additions was the fishing-for-chickens episode.  Out of nowhere came the déjà vu/vujà dé opening scene.  And that was it.  In 1992, Ricochet River came out to strong reviews and brisk initial sales as a hardback book.

After sales of the hardback ran their course, Blue Heron Press, of Portland, bought paperback rights from Knopf.  The book took on a smart new design and wore a different cover and was the first edition to be taught in schools.  Ricochet River caught on with students because the story is grown up and they recognized the place.  Schools liked it because the book ripples across curricula from English class to Oregon history to biology and social studies.

But too many schools couldn’t use Ricochet River.  The original version has a graphic outdoor rainy sex scene.  The scene is comic and bungling and incomplete, but still . . .  Taken out of context and read aloud to the school board, that passage is trouble.  Protesters targeted one Portland-area school district with a web-based anti-Ricochet River campaign.  The Oregonian op ed page and a local television station picked up on the fuss.  The public airing had made the book toxic to school administrators.

Coincidentally, Blue Heron Press went out of business in 2002.  For two or three years there, no one could buy a new copy.  Used copies, too, funneled into short supply.  When publication rights reverted to me, in 2004, I approached Ooligan Press, at Portland State University, with a plan to modify Ricochet River.   Without dumbing it down, I could keep the book alive in public schools.  A team of Ooligan graduate students helped me edit the explicit sex scene into a wet young-love encounter.  Then, too, I cut a late-in-the-book chapter where two young couples order food and wine from a hotel room and begin to (gasp) take their clothes off.

Self-censorship didn’t come easily, but it would hurt worse to see the book remain out of print.  Compromise has kept Ricochet River alive again at schools and with book clubs for an additional twelve years now, and everything from the book’s pre-publication prototypes through its subsequent versions remains true to the story and to the book’s Oregonness.  Thanks now to the good smart folks at Ooligan – to Abbey Gaterud and Jacoba Lawson in particular – this 25th Year Anniversary Edition leaves the most recent text unchanged and adds a discussion guide and background material.  Grateful, I am, to see the book’s rollercoaster ride of publication take this next wide turn and rise.

Readers of Ricochet River now have a convenient collection of discussion questions, arranged according to the chronology of the novel, complete with thematic analysis and active learning activities.

Get The Study Guide
Ricochet River
In Schools
Because I was a high school English teacher long before I was a writer, I like to visit classrooms where Ricochet River is taught. The best timing for this is soon after students have finished reading the book. It’s a chance for students to ask questions about the story. Chief among those questions, without fail, is about the ending and what happens to Jesse, and why. I had tried – and rejected – several alternative endings while writing the manuscript, so there’s a lot to talk about there.

Life cycle of the Pacific salmon is central to the story. There are biological facts related to Link’s theory of Darwin reversed – survival of the timid, un-natural selection – that are ripe for discussion. Celilo (suh-LYE-low) Falls, along with its disappearance, is a story that has had very real impact on human culture and physical environment here in the Northwest.

And then about the writing process. It always bugged me, when I was teaching, that I could never get students interested in re-writing something they’d done passably well. Creative and expository writing, both, can always get better by redoing it. Now, because of my brutal history of rejection and failure to publish – of having to re-write – I have some authority for recommending revision.

I can’t remember the last time I declined an invitation to visit a school. Students keep me on my toes. Class visits are my antidote to self-satisfaction. So I charge just $100 to come to class anywhere in the Willamette Valley, a little more if it involves serious travel.