Lucky for me, I grew up swimming across and drifting down and poking around and puzzling over the Clackamas River.  We lived on an unpaved dead-end road gamely called Lakeshore Drive, almost in Estacada.  A flat deep green beautiful part of the river lay right out our door.  The wild laughing lyrical part struck up again below the dam.

My ninth grade English teacher, Miss Davis, insisted that Henry David Thoreau’s Walden was a good book.  Can you believe that?  I read about Walden Pond and said we’d do better to take Miss Davis for a float down the Clackamas.

She thought I was kidding.

I didn’t have the brass or the words at the time to defend my position with Miss Davis.  But it’s a known fact that rivers can be as good as books for getting outside yourself.  Other kids, maybe, had an imaginary friend.  In the Clackamas River I had a substitute teacher, a supplementary instructor, not imaginary at all.

The river was a physics lab.

A rock, of course, will sink like a stone in water.  But a flat rock, slung spinningly near the water surface and at an angle parallel to it, will go skipping across the water in defiance of gravity and common sense.  How cool is that?!  The first time a kid pulls that off ranks right up there short of first-time sex on the scale of things he’ll want to do over and over whenever he can and as long as he lives.

From riverside one day I brought home a curious bowl-shaped stone, large enough to hold half a cantaloupe.  Mom recognized this as an archeological find.  It was a mortar (as in mortar and pestle), for pulverizing food.  Clackamas Indians liked their roots mashed.  Is this widely known?  Mom and I knew that these Indians had been fishers from down by Willamette Falls.  Each August, we supposed, they must have come right up the river here on their way to high huckleberry fields.

Broken obsidian from a cliff-side shallow cave was evidence of an arrowhead factory.  And so.  Outside our front door, where others put decorative pots, sat the stone mortar and a block of obsidian.  A band of Indians might drop by any day and find us hospitable.

There is a mathematics to history.

If Estacada in 1956 was fifty years old, and this vanished people had passed through for ten millennia, how much longer than we had they loved and cried and joked and suffered the rain and known the play of sunlight on water and told stories?

And stories.  So many stories.  I could go on and on, and I have, writing fiction.  But here is a very short true story:

The preacher, attempting a baptism at Eagle Fern Park, lost his footing and fumbled Mary Ethel Harbert into an eddy.  We kids splashed in and hauled out Mary Ethel sputtering and eternally thankful.  She was saved.

The river demonstrates biology.  Natural history.  That is to say, it teaches humility.

The banks of the lower Clackamas are watched over by Douglas fir trees that witnessed the first wagons crossing the very last stream on The Oregon Trail.  The trees are descendants of vast conifer forests that for millions of years covered these western Oregon slopes.  The poet Gary Snyder called them “Doctors of Perennial Habitat, experts at staying put, and we are the little grazers and grifters who are shouldering them aside.”

I wouldn’t go that far, but it’s something to think about is what the Clackamas River says.

Another Way the River Has:
Taut True Tales of the Northwest

Many of these stories first appeared in Northwest Magazine (Jack Hart, editor) of The Sunday Oregonian.  They are abbreviated and author-edited here for length, but they are not updated.  In chronological order of publication, they are:

Others are adapted from articles that first appeared in Portland Magazine (Brian Doyle, editor) of the University of Portland:

Acclaimed author Robin Cody is a native speaker who probes the woods and streams and salmon that run to the heart of what it means to live and love, to work and play, in the Pacific Northwest. His characters – from loggers to fishers to cowboys to the kids on his school bus – are smart and curious, often offbeat, and always vivid. Cody brings the ear of a novelist and the eye of a reporter to the people and places that make the Northwest, and Northwest Literature, distinctive.
Oregon State University Press

He has a heart as big as a river, a really cool wife, and a silver-plated story-teller’s engine in his head. These tales will echo and shiver in you for a really long time.

Bryan Doyle is the author of Mink River and Martin Marten

Brian Doyle
Robin Cody’s characters are so vigorous and colorful they might have stepped from the pages of a Kesey novel. He champions those who need a voice: special education children, deaf basketball players, delinquent juveniles, and baseball umpires. The most unforgettable character is Cody himself – empathetic, clear-eyed and humorous.
Craig Lesley, author of <em>Winterkill and The Sky Fisherman</em>
A rock, you know, will sink like a stone in water. But a FLAT rock, slung spinningly near the water surface and at an angle parallel to it, will go skipping ACROSS the water in defiance of gravity and common sense. How cool is that? The first time a kid pulls that off ranks just short of first-time sex on the scale of things he’ll want to do over and over whenever he can and as long as he lives.
from “The Clackamas River"
Another Way the River Has
The Turtle was . . .

. . .  a wooden, green, flat-bottom, theoretical sort of socially awkward boat – and writing studio – on the Lower Columbia River between Portland and Astoria.  I helped Sam McKinney make her.  The Turtle has a role to play in 9 of the 24 stories in this collection.  And here she is, at rest in Portland Harbor and landing on Puget Island. 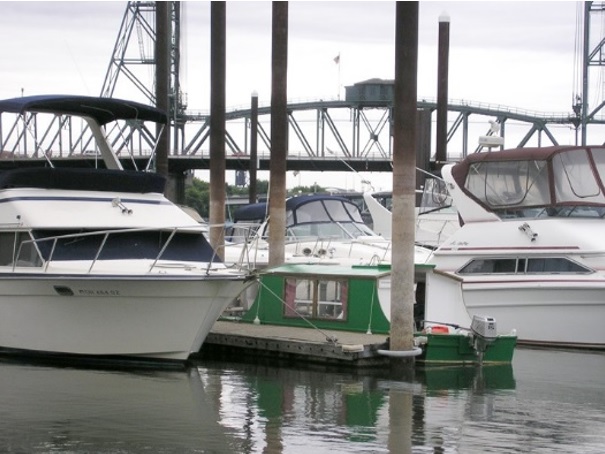